Putting hands together and sometimes simultaneously bowing down slightly, followed by a friendly Sawatdee krub or Sawatdee kha – this is the typical gesture you will encounter, when Thai people are greeting each other, or when you are greeted by Thais. Incidentally, even welcome statue in front of numerous shops and restaurants in Thailand may bear this simple yet striking gesture, as can, for instance, be seen with the Ronald McDonald’s statue in front of every McDonald’s in the country. This iconic gesture is known in Thai as wai (ไหว้), and in this article, we will delve into its story and significance in the culture of the land of smile together.

The Royal Society’s Thai dictionary (2011) defines the word wai as “a gesture to show respect by putting hands together”, and at its core, that is exactly what wai is – a gesture of respect, even though it is often associated with greeting by foreigners. This illustrates Thais’ propensity to always be respectful, even when they are performing such minor action as greeting. Still, wai as a salutatory gesture has been deeply rooted in Thai culture for quite a very long time. To illustrate, in the past, before the widespread standardized usage of the nowadays familiar word “sawatee” (สวัสดี) in the early 1940s, one of the phrases used to be employed for greeting is phom wai or chan wai – I ‘wai’ (salute) you – as to, for example, be seen in a theatrical drama from the 1900s called “For His Child”, where one of the characters greets another with phom wai. Furthermore, there is an age-old saying in Thai – pai la ma wai (ไปลามาไหว้), which means to wai when greeting and bidding someone farewell. Incidentally, this saying functions somewhat as a mantra hardwired among Thai people, where they would always wai in respectful or formal salutatory and valedictory contexts.

Wai may seem like a simple gesture, yet under its apparent simplicity lies very elegant steps and etiquettes to be known for one to truly master the art of wai. At the core, to wai you just have to put your hands, palms facing each other, together, placing them in front of your chest, or to be precise, in front of your sternum. Your elbows should be kept squarely close to the side of your body. This is known as anchalii (อัญชลี). The next step of wai, called wantaa (วันทา), is a bit more complicated, having three different variations according to who you are ‘wai’-ing to. The first variation, for paying respect to monks, requires you to bow your head down while tilting your hands forward until your thumbs touch your glabella, the area between your eyebrows. The second variation, for someone you highly respect or for your elderlies and parents, is virtually the same as the first, except this time, you will just have to touch the tip of your nose with your thumbs instead of your glabella. And finally, for others, just bow your head slightly and tilt your hands just a bit forward, after doing anchalii. There is also a gesture one does when receiving wai from others called rab wai, which basically is just doing anchalii without wantaa, or in other words, just putting your hands together in the aforementioned position without bowing your head or tilting your hand forward.

The Story of Wai

Although wai might have become synonymous with the archetypical Thai culture, the story of wai actually started in India. The gesture that would become the iconic Thai wai originated from one of the “mudra”, which, according to Rajput (2016), “is a Sanskrit word used for the hand or hands position to depict certain rituals gestures conveying different messages”. In this case, the mudra which came to be the Thai wai is the anjali mudra. Similar to wai, anjali mudra is also “a gesture of devotion and respectful greeting” and bear the virtually identical features of putting hands together in front of one’s chest.

Mudra is believed to originally be a method of sign communication back in the past, but over time, it has since been largely interwoven into religious rituals, such as in Hinduism, where for instance, it forms the basis of some of the postures in yoga. Apart from Hinduism, mudra has also become an important part in Buddhism, another religion originating from India. In this case, the gesture becomes an accompanying feature for sermons, meditation, and the recitation of prayers. When Buddhism arrived from India in Southeast Asia during the mid-first to second century CE, the usage of the ritualistic gestures was also brought along and began to be integrated into the local culture. While most of the mudras remained liturgical, mostly appearing in religious rituals or as depictions in Buddhism influenced murals or sculptures in temples, some of the gestures apparently caught on into daily life usage, as is the case with anjali mudra becoming the quintessentially Thai wai. As a greeting, nowadays, wai would be more commonly performed by someone younger towards someone older, or in a formal context. For instance, it would be expected from the students to wai their teachers, when greeting them. Children are also often encouraged to wai their parents and relatives. In the past, it used to be the case that wai would be regarded as a universal greeting gesture, where friends might greet each other with the aforementioned third variation to wai. However, in the present day, with Thais being very receptive and adaptive to foreign cultures, most people would greet their friends with a wave instead. With that being said, the next time you would like to greet someone with respect in Thailand, we highly encourage you to try out wai! Apart from being used as a salutatory gesture, wai can also be employed in many different contexts that require one to show respect or reverence to others. First and foremost, wai can be used when expressing gratitude. It is very common to see Thais wai, while also uttering khop khun krub or khop khun kha, when they receive favors from someone. Secondly, wai can also be employed when making an apology, alongside saying kho tot krub or kho tot kha. Apologizing with wai often makes your apology appear a bit more sincere, as you can usually see from countless public apologies broadcasted on Thai television, which will almost always be accompanied by wai to garner public sympathy. Lastly, as a result of its religious root, you will also virtually always encounter wai in religious context. Whether reciting prayers, or receiving blessing from monks, or listening to sermons, Thais will always put their hands together in the anchalii position throughout the liturgical ritual.

Wai, being deeply ingrained in Thai culture, also appear in various traditional art forms, from performance arts to visual arts. One of the most common iterations of wai in traditional art is the thep phanom (เทพพนม) pattern, which is a figure depicting thewadaa or angels putting their hands together, often appearing on murals in temples. Additionally, thep phanom can also refer to a traditional choreography in khon and lakhon, the traditional theatrical performances, bearing the exact same gesture as the one represented on murals. Moreover, following the aforementioned definition of the word, wai can not only represent a gesture, but it can also be the embodiment of an attitude of respect and reverence, such as with the ceremony of wai khru. In this ceremony, pupils usually pay respect to their khru – teachers – as a symbol of gratitude for the knowledge imparted. In this case, khru can both denote the person imparting the knowledge, and the abstract concept of being taught, typically being embodied as holy spirits residing in the things crucial for learning the subject. For instance, students of Thai traditional music have to wai the khru in their instrument before practicing. Similarly, medical students in Thailand also have to wai the cadaver before doing a dissection to express gratitude for providing them with anatomical knowledge. 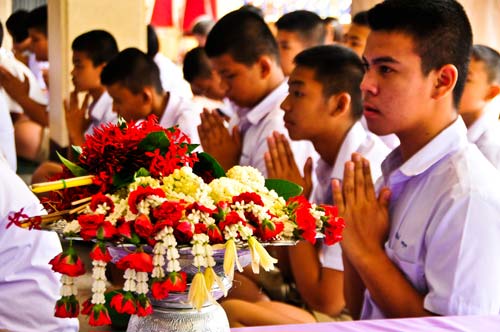 As mentioned earlier that wai has its roots in Indian culture, which spread into Southeast Asia through Buddhism and Hinduism, it should come as no surprise that one can encounter similar gestures among the diverse groups of cultures in the region. Among the chief examples is the Cambodian sampeah, where it carries essentially the same functions as Thai wai. Although it also bears similar gestures of putting one’s hands together, it differs in the finer details, where instead of bowing your head and tilting your hands forward until your thumbs touch the corresponding part of the face as in wai, the gesture would be executed closer to the appropriate area with the head bowing slightly, so that area touches the tip of the middle or index fingers. Another similar gesture called sembah can be found in Indonesia, especially among the predominantly Hindu population of Bali. Although its usage in the country has largely subsided, it still plays a significant role in traditional visual and performance arts as well as the country’s cultural identity. Other similar gestures are also found in various countries in the subcontinent, such as  the ones accompanying Burmese mingalaba or the Laotian sabaidee greetings. Even though the symbolic gestures of respect of Southeast Asia are, in a way, united under a common ancestor from India, every culture in the region has adapted and tweaked the original anjali mudra in their images; thus, creating numerous colorful and unique versions of the, once, same gesture. Wai is not only a mere gesture, but it also encapsulates the attitude of respect that is an integral part of the mentality of Thai people. It also highlights their openness and creativity, with them being receptive of foreign culture, while also adding in a touch of Thainess to shape it into their own cultural heritage. So, the next time you interact with Thai people, be sure to sprinkle in the appropriate wai. This will surely not only impress your Thai conversation partners, but will also allow you to better immerse yourself into Thai culture!

The story of “wai” is yet another iconic facet of Thai culture and heritage. We saw how the essence of Thainess, namely the respectful and welcoming nature of the Thai people, is represented through this noble greeting gesture. Join us in exploring more stories of Thailand and the Thai people, as we take you on a journey to discover Thainess.