Home / Culture & Heritage / Muay Thai / Articles / Muay Korat – It is all in the fighters’ blood!

Muay Korat – It is all in the fighters’ blood!

As a strategic frontier city in the Ayutthaya period (1350-1767), the city of Korat (currently a province in the northeast of Thailand, also known as Nakhon Ratchasima) had to be protected at all costs. For this reason, the people of Korat were born fighters and their weapon was Muay Korat [มวยโคราช]. Today, this martial art is one of the four surviving styles of Muay Boran or ancient kickboxing.

When King Rama I established Bangkok as the new capital of Thailand (then known as Siam) in 1782, it ushered in a new age of the Thai civilization: the Rattanakosin era. The dynasty founded by King Rama I is known as the Chakri Dynasty, and is the current ruling Royal Family of Thailand. Throughout the Rattanakosin era, Muay Korat has gone through major changes and has even played an important role in helping to defend the nation. The periods of changes in this style of fighting roughly coincide with the changing of the ruling monarchs.

The beginning of the Rattanakosin era was marked by military threats, both from foreign forces and rebelling vassals. In 1827, Lady Mo, the wife of the Governor of Korat, led the people against the troop of King Anuwong of Vientiane during the advent of the Lao Rebellion. Using the techniques of Muay Korat, the people of the city was able to fight off the Laotian army. For her bravery, Lady Mo was granted the title of “Tao Suranaree” by King Rama III. 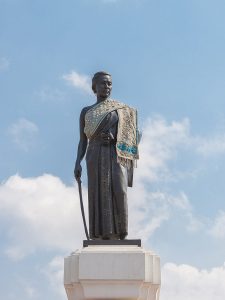 King Rama V was fond boxing and often sponsored matches with contestants coming from all regions of the kingdom. The King’s son, Prince Abhakara Kiartivongse, also welcomed many skilled fighters to practice in his palace. Muay Korat was recognized as art form with support from King Rama V, who bestowed the noble title “Muen Cha-ngat Cherng Chok” (a sure puncher) to Daeng Thaiprasert, a boxing maestro from Korat. When the King’s other son, Prince Vajiravudh, succeeded the throne as King Rama VI, he continued his father’s effort to support the art of boxing. Under the guidance of King Vajiravudh, Muay Thai was developed into a proper sport with standard rules and regulations. Boxers started wearing boxing gloves instead of tying threads around their fists after a fatal boxing match that took a life of a boxer. This era saw the emergence of private boxing schools, an influx of Korat boxers into Bangkok, and a Muay Korat curriculum in the Royal Cadet School.

A celebrated Korat boxer in this era was “Suk Prasat-hinphimai. Born in Phimai, Korat, Suk competed for the first time in 1931 at the age of 21, but was imprisoned as he turned 27 for homicide. Upon his release, Suk, 34, returned to the ring. His unmatched techniques and powerful punch earned him the title “Hok Mokkhasak” (Mokkasak spear, a deadly weapon in the Ramayana epic). After he passed way at the age of 90, a monument was erected in Phimai in his memory. At present, the practice of ancient Muay Korat as a revered form of martial arts is not as prominent as before; instead, it principally serves entertainment and business purposes. Fortunately, those who wish to delve into this art form can do so in a few Korat boxing schools that operate today.

Muay Korat is known for its heavy and forceful attack. One respected teacher of Muay Chaiya once said that a Muay Korat kick was a neck-breaking kick, or could even detach the head from the body. Equally savage is the punch known as the “buffalo hurling fist” [หมัดเหวี่ยงควาย]. Each kick and punch is normally released in a wide angle or as a swing, but during the infighting, straight strikes are preferred. The stance of Muay Korat is elegant and flexible: the boxer puts the weight on the front foot, extends the fist from the arm of the same side, and lifts the heel of the other foot like tiptoeing.

Another element that differentiates Muay Korat from other boxing styles is the use of physics to, for example, dampen the impact of the opponent’s attacks or increase the intensity of the boxer’s strikes. These techniques are called “force enhancing” and “force transferring.” A good Korat boxer must understand the rule of physics to know when to resist and when to go with the flow, which movement will gain him more strength or save him from serious injuries.

Muay Korat teachers are also known for their creativity in inventing boxing moves and reading games. Their goal is make students become better boxers than they are to ensure the survival of the art while teachers of other schools will keep the best techniques to themselves. In ancient times, boxers would train their strength and focus with daily life objects or activities, such as retrieving water from a well, carrying water buckets, pounding rice, cutting firewood, climbing trees, running through rice fields, rolling on the grass soaked in morning dews, gazing at the dawning sun without blinking, running in deep water, or using both hands to chop on water and trying not to blink when water droplets hit the eyes. To perfect the stance, the punch, the kick, the knee and the elbow, they would tie ten limes to a rod and punch or elbow them, making sure that the limes did not fall or hit their faces, and the rope not tangle. There was no shortcut to become a mighty Korat boxer. It took many years to perfect the following renowned techniques.

Like other Muay Thai schools, Muay Korat has its own wai khru [ไหว้ครู] dance which boxers must perform before fighting to bring good luck, calm his mind, study the environment, and to intimidate opponents. The five moves in the wai khru dance of Muay Korat are as follows: Since Korat boxing uses wide-angle punches, the boxers will wrap their hands with threads up to the elbow to prevent injuries and dampen the impacts from kicks and punches. The threads must be prepare by soaking them in rice water and leaving them to dry and harden. Boxers wear only shorts, no shirt or shoes, and wrap a phakaoma [ผ้าขาวม้า] cloth in a triangular shape to protect the genitals. A sacred napkin, or prajiad [ประเจียด], is tied at the forearm on both sides, and an auspicious garland called mongkhon [มงคล] is placed on the head at all the time. If the mongkhon [มงคล] of either of the competitors falls off, both sides will stop fighting and allow the other to pick it up again.

With a long history and formidable power of Muay Korat, it is no surprise that this martial art manages to maintain its majestic aura until today. Although its original purpose as a war weapon has faded out of importance, Muay Korat will always remain a fascinating science and art, and above all, the pride of the Thai people.