Black Cats are Lucky – Thai Cats and the Thai People

If dogs are humans’ best friends, humans are cats’ best slaves. For many of us, cats are famous for their “uncaring attitude” – haughtiness, arrogance, and laziness – but it would be a blatant lie to say that we are not charmed by these very feline characteristics. And once in a while when these little troublemakers switch on their sweet side, even the most hard-hearted melt on the spot.

But cats are so much more than just pets. Since ancient times, people have interpreted their charismatic and mysterious aura as the bringer of either good or bad luck. In the Thai culture, cats have been an integral element in many auspicious traditions from the royal housewarming ceremony to the rain-making parade.

The cradle ceremony is performed when a baby is about a month old. Parents will prepare a crib and place blessed items, such as a melon and a pestle, at the edge of the crib, under the cushion, and under the pillow, followed by a clean old male cat, and then the child. The parents will then lull the child and the cat to sleep. It is believed that the baby sleeping with a mellow and tame cat will be a nice and well-behaved kid.

Thailand is traditionally an agricultural society in which the livelihood of the local people relies on the consistent and predictable arrival of rain. In times of drought, farmers have to find ways to communicate with the angel of rain and that is through the cat parade. It is believed that an animal that has the same color as a rain cloud can induce precipitation. Therefore, a Silver Blue cat, or a Si Sawat cat as it is called in Thai, is paraded. As the procession passes before people’s houses, the owners will pour water on the cat and pray for rain. Not only does the fur of the Silver Blue look like a rain cloud, but its green eyes also represent the growth of vegetation and fertility.

After the coronation, the new king will have to attend the royal celebration for his new palace. He will ascend the throne and spend on night there. In the throne hall are present a number of auspicious objects and those from the royal regalia, namely a golden key, a mortar, seeds, coconut flowers, betel nut flowers, a flywhisk made of tail hair of a male white elephant, a white chicken, and, of course, a cat.

An ancient Thai belief says that once the construction of a new house is completed, before the owners can move in, someone must first carry a cat into the house. A few theories offer explanations to this practice. One says a new house needs a cat to catch mice. Another refers to a Chinese belief that cats can drive away demons because they have an excellent night vision. However, for Thais, we simply believe that a visit by a cat or a dog brings luck and happiness.

The most controversial aspect of cats is surprisingly not thorny or harsh but rather smooth and fluffy. Surely, we are talking about their coat. While cats with white, gray, orange, calico, tortoiseshell, or tiger coats are unconditionally loved and welcomed, black cats are sometimes ostracized.

Some people are afraid of black cats because they are believed to bring death or to be witches’ cats, but the ancient Thai text says differently. There are many types of lucky and unlucky cats, and we need to look beyond the color of the fur.

In a traditional Thai scripture, cats are classified into 23 groups based on their fur patterns and specific behaviors, 6 of which are unlucky cats. The remaining 17 are considered lucky, and of that number, 10 places are taken by black cats! Let’s see what they look like.

The lucky cats are believed to bring their owners wealth, prosperity, good health, and dispel all perils and omens.

The other 7 lucky cats vary in colors and include some of the world-famous Thai cats, like the Siamese Cat.

In 2009, it was inscribed as the national animal of Thailand. Another lucky cat that does not appear in the Thai ancient scripture, but is loved by the Thais regardless, is a pure white cat called Kao Manee (ขาวมณี). Kao Manee is a medium-sized cat with soft white fur, a heart-shaped head and a large, flat forehead. Its eyes can be either blue or yellow. It is well-known for its mellow and sweet nature.

When it comes to the unlucky cats, interestingly, Thais people are more concerned about the behaviors of the animals than their appearances.

Thai Cats in the World

Thai cats are certainly loved by the Thais, but they have also won the hearts of those living in other corners of the world for centuries. In 1879, the Siamese Cats of Thailand traveled to North America as a gift from the US Consulate in Thailand to Lucy Webb Hays, wife of President B. Ruttherford. That was the first time the westerners learned about Thai cats. But it was not until 22 years later in 1901 that Thai cats truly became famous. Sir Owen Gould, British Ambassador to Thailand, gifted Siamese Cats to his sister who presented them at a cat fair in England. They were so popular there that the Siamese Cat Club was founded in 1901 in London.

In addition to the Siamese Cats, the Thai Silver Blues first journeyed to Oregon in the United States in 1959 when Cedar Glen Cattery adopted the cats from siblings Nara and Dara. Later, in 1966, a cat breeder (specialized in Siamese Cats and Silver Blues) from Maryland got his Silver Blue into a cat competition at an annual event and won the first prize, establishing a name for Thai Silver Blues in America and the western world.

Unfortunately, in Thailand nowadays, only five breeds of the lucky cats remain (Siamese Cat, Silver Blue, Supalak, Pure-Black, and Pure-White). Nevertheless, with the growing trend of animal protection in Thailand and the pet business which is worth almost 4 billion baht per year and cats accounting for 1/3 of the pets kept by the Thai people, it is encouraging to see more animal lovers and cat owners unite to conserve and breed these unique and adorable cats of Thailand. To the Thais, cats are more than pets after all! 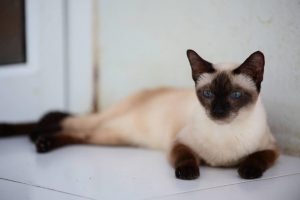 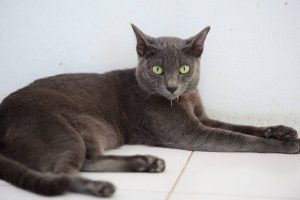 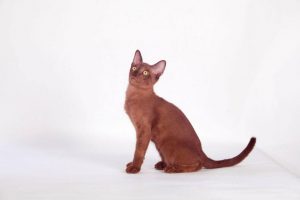 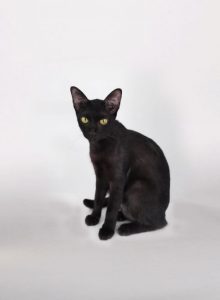 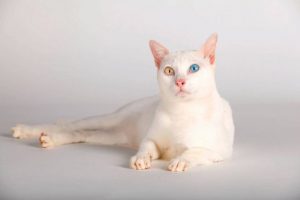