Nora [โนรา] – form of folk theatre from Southern Thailand – is famous for its sharp movements, quick rhymes, and – most notably – its colorful costumes. Called khrueng song Nora [เครื่องทรงโนรา], these costumes — which can weigh more than fifteen kilograms — allow performers to strike up delicate yet elegant and powerful poses. Each component of the wardrobe is handcrafted with the highest degree of artistry, with a variety of materials being used.  Join us in examining the items worn for a typical Nora performance, from head to toe.

Nora costumes are influenced by the mythological creature kinnari – a blend of a bird and a woman. In earlier times, costumes were of fewer pieces, as only men — who performed topless — were allowed take the stage. However, when women began to take on the artform, the items of clothing and accessories increased. Most notable are the beaded dress which are now worn by both male and female performers. 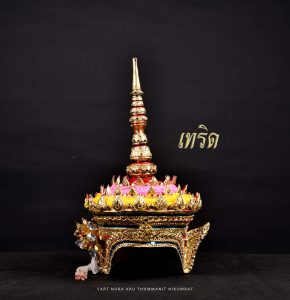 Among the highlights of the costumes is a notable headdress, resembling a three-sided shield, called “serd”. Its frame is made of bamboos with pointed hardwood top. The wood used to create the headdress must carry auspicious meanings, as the crown is believed to be a sacred decoration.

After the pieces of wood are assembled, the serd is covered in lacquer and gold, then adorned with kra-chang (lotus-like patterns), gemstones, and colored glass. At the top of the serd is a sacred thread. To further adorn the head, performers tuck a flower between the serd and their ear.[1] Ping kor, a neck cover, is made of colorful beads that are aligned in a triangular shape. A pair of ping kor is used to cover both the front and the back of the neck. 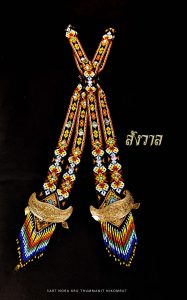 Sang wan is a two-pieced cross between shoulder straps and a body chain. It is made of beads and was used to adorn topless male performers, along with the thap suang (mentioned below); however, nowadays, it can be used on more clothed performers, too (including female performers, who were not present in earlier performances). Khlum lai is a colorfully beaded triangular shawl. Two pieces of khlum lai are used to cover both shoulders. Cham yarm, a silver buckle, is placed on the cross of sang wan on the back, to shape it. Thap suang is a diamond-shaped silver breastplate, carved in many designs and hung at the middle of the chest. Phan khrong, a chest strap, is made of colorful beads aligned in a rectangular shape and wrapped around the upper body. Pha nung, a brocade, is a main bottom piece, serving as a pair of pants. It is a large piece of fabric that is secured into pants by being pulled back and tucked between the legs. The hem rolls down into a hang hong (swan tail). Na pha, a calf-length cloth that hangs from the front, is a rectangular sash whose width is approximately four inches. There are two types of na pha: one with colorful beads, the other with laces sewn into various patterns. Performers typically use three pieces of na pha, tying them tightly at the waist and letting the hems hang loose around the knees.

Pha hoi, a bright, thin cloth, typically hangs from the waist, flanking the three pieces of the na pha. There are a total of four pieces of pha hoi. Pan neang is a silver or brass girdle carved into splendid designs. Peek, the wings, is sometimes called hang (tail) or hang hong (swan tail). It is made of buffalo horn, metal, or plastic painted in black. Peek includes a pair of bird-like wings whose tip is lifted and tied together with a wool tassel. Along the wings are beads hanging down like feathers. Peek is used to cover the pha nung with the tip reaching out like the tail of a kinnari. 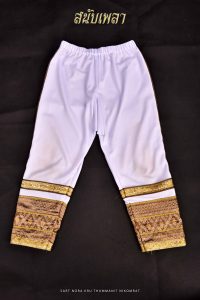 Sanab plao are calf-length trousers whose hems are decorated with beads, colored fabric straps, or gold or silver laces, sewed into beautiful patterns, such as kruay cherng (funnel) or roi rak (rak flower). Peek nok an is a silver-plated ornament that hangs from the sang wan’s bottommost part, touching the performer’s hips. 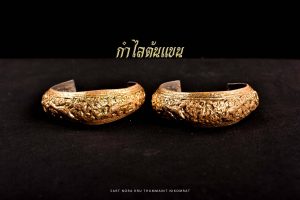 Kam lai are bangles carved in intricate patterns. In Nora, they can be divided into a few categories. Kam lai ton khaen (upper-arm bangles) and Kam lai plai khaen (lower-arm bangles) are silver bangles, used to achieve a more pronounced look of the muscles, and more elegance. Kam lai khor mue is a brass wrist bangle, of which performers wear five to ten, as they make a dramatic sound when changing postures. Leb plorm are used to make the fingernails curve, like a kinnari’s. They used to be made of rattan, but nowadays are made of brass, silver, or stainless steel, and extended by beaded rattan or white strings. Leb plorm is put on eight fingers – all but the thumbs.

Kam lai tao are anklets made of small rectangular silver or beaded strings. They are considered more optional pieces.

Masks are worn by supporting characters in the play, who assume the roles of comic entertainers. These characters wear less elaborate clothing, often mimicking everyday clothing of people in the past. A wooden mask known as na phran is used for the supporting, comic male character. Painted mostly in red, the mask has a long, exaggerated nose, thick and long black eyebrows, a moustache, and upper teeth, which are painted white or made of metal. Its top is also typically covered with duck or goose feathers or other white feathers, to represent grey hair.

The word na phran literally translates to “hunter’s face”. This is due to the fact that the comic male character often assumes the role of a hunter. Specifically, he depicts the character Phran Boon, which is a hunter from the legend of Phra Suthon Manora. A wooden mask made for the supporting, comic female character, na tha see is typically painted in white or a porcelain tone, and, if needed, adorned with beads. The word na tha see translates to “female servant’s face”.

Beads play a central role in Nora costumes. Known as khrueng luk pad [เครื่องลูกปัด] or beaded ornaments, the beads of a Nora costume can be sewn into various patterns, such as flowers, marbles, and diamonds. The origin of Nora breadcraft is still unclear. However, the practice was presumably influenced by ancient decorative beads from the Indus Valley in South Asia.

In earlier times, such as during the reigns of King Mongkut (1851-1868) and King Chulalongkorn (1868-1910), the beaded parts of the costumes consisted of fewer details. Only black, white, and brown beads were used, as the craft was still limited. In fact, the beads had to be imported from Penang. However, around 1937, when beads became locally produced in Hat Yai District, Songkhla Province, more various beads became available and cheaper to acquire. There are a few patterns of beads that have withstood the test of time, including:

The Future of Nora Costumes

Nora ornaments express the unique local identity of Southern Thailand. The audiences who view Nora performances are spellbound by the elegance and colorful expression of the beaded costumes. As times change, so do the Nora costumes, which become influenced by other entertainment genres. Likay costumes, for instance, have inspired some Nora costumes to be decorated with diamonds or crystals, which shimmer brilliantly under light.

[1] The serd likely originated from crowns of kings, as evidenced in images of the Buddha from the Ayutthaya period (1350–1767). The Buddha was adorned in the headgear, earrings, sang wan, pan neang (girdle), sanab plao (trousers), and shoes. This style of ornamentation originated in Central Thailand and spread southward. Today, some ancient images of the Buddha from the South, such as in Nakhon Si Thammarat, Phatthalung, and Trang Provinces, can still be seen depicted with serd similar to Ayutthayan Buddhas. Serd is, additionally, a sacred crown central to the wai khru mor rite. The rite is a part of Nora rong khru, a ritual to pay respect to deceased Nora teachers.